Why SRK is the King of Bollywood 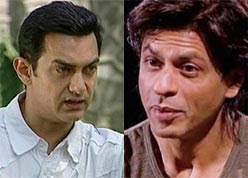 I decided to post something lighter on blog today. And it couldn't have been better. I was surfing IBNLive this morning and came across this little chit-chat and taunting between Amir Khan and Shahrukh Khan that is going on these days in Bollywood. Amir had asked SRK 'How it felt to be No. 2'. SRK replied in a press conference saying "I just want to tell you, Aamir is a dear friend of mine and if he has thought that I am second to him, it's a great compliment to me."

War of words boomeranged on Amir himself. Dear Amir, you can't beat SRK in any department, be it acting, humor or personality. So it's about time you stopped attempting! SRK is and will be the 'King Khan'

That was indeed very witty of SRK.
I love both of them equally though !! :-)

I too started my own blog...

Plz do visit it some time and post ur valuable comments on it..After all u r one of the inspiratiol souls for me !!!

ofcourse u will ike SRK's 'sarcastic' sense of humor ! for me.. no favorites though :P

Gandalf
Welcome my son, welcome to the machine. What did you dream? It's alright we told you what to dream. You dreamed of a big star, He played a mean guitar, He always ate in the Steak Bar. He loved to drive in his Jaguar. So welcome to the Machine.